Visitors have flocked to Gloucester’s beaches over the last two weeks.

City officials are counting up beach parking revenues and hailing the influx of visitors to America’s oldest seaport, but are also wrestling with perhaps its only downside to beach weather — traffic.

“It’s been horrific, and we’re looking to do something about it,” Mayor Sefatia Romeo Theken said Monday.

She, police Chief Leonard Campanello and Public Works Director Mike Hale have been meeting regarding traffic snags that— fueled by the state’s ongoing A. Piatt Andrew Bridge work, the city’s continuing Washington Street roadwork and other issues — have tacked on as much as 45 minutes for drivers heading to and from Gloucester’s popular Good Harbor and Wingaersheek beaches and Stage Fort Park.

Campanello outlined a series of shortterm and long-term recommendations in a memo dated July 14 and sent to Chief of Administration Jim Destino. Some of them are:

  Putting electronic signs in place west of Route 128’s Exit 14, for EssexAvenue/Route 133, to warn motorists that beach lots are either limited 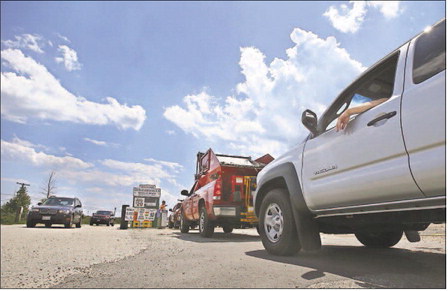 Vehicles line up Monday at the entrance to Good Harbor Beach in Gloucester. Despite temperatures in the 90s, the “Parking Lot Full” sign wasn’t used.

  Continued from Page 1 to resident parking or full altogether, a step Hale said Public Works took this past weekend.

  Limiting Public Works roadwork during peak periods while “understanding the small window(inwhich) some jobs can be accomplished.”

  And, over the long term, hiring and training 10 to 15 reserve officers who could be used specifically to handle traffic-choked locations.

While admitting the issue needs attention, Romeo Theken and Hale both acknowledged that some solutions may be easier said than done, and that even other solutions might be more viable.

While backing the idea of better advanced warning signage, Romeo Theken said she also wanted to station a city staffer along Concord Street by the site of the old drive-in theater to let motorists know when Wingaersheek’s lots are jammed.

The mayor also wants to, when necessary, direct incoming traffic along Route 128 onto Essex Avenue or the lower part of Concord Street toward Stage Fort Park’s Half Moon or Cressy’s Beach, which can be the last to fill up on busy beach days, One drawback to that solution is that Stage Fort Park serves picnickers and other visitors beyond those who want to make use of beaches, and is home to the city’s only dog park.

But any new hiring and overtime costs may have to wait, depending on budget issues, she said.

By many counts, Gloucester’s traffic has reached new heights — or depths — over the sunny and increasingly warmer days of the last two weeks for a variety of reasons.

Beyond visiting beachgoers, thousands of Vietnam veterans and others joined the mix the weekend of July 11 to 12 to viewTheWall That Heals Vietnam Memorial replica at Fuller School, which is located along the route to and from Good Harbor.

Weekday traffic in and out of town has been tangled by the state Department of Transportation’s ongoing repairs to and restoration of the A. Piatt Andrew Bridge, notably last Friday, when Good Harbor Beach was packed. Plus, the city’s extended work on Washington Street has occasionally backed traffic onto Grant Circle.

“We work Monday through Friday, and we try to do some work at night,” Hale said, “but honestly, we have such a short construction season, the city’s going to have to make a decision as to how we can truly manage parts of this. We try not to be in the way as often as possible, but we had a very long winter, our Chapter 90 (local road work) money wasn’t available until July 1— we have to get these projects done now.”

That’s not the only subtle complication. Romeo Theken and Destino both noted that, while the idea of opening park-and-ride lots at Fuller may sound good, cars alone aren’t the problem.

“We have to be careful in opening more lots,” the mayor said, “because (Good Harbor) beach itself can be already full. When it gets to high tide, there’s no more room for any more people, let alone any more cars. Where will those people go if we fill the Good Harbor lot, then fill the lot at Fuller and shuttle more people in?”

She added that she’d rather see more people make use of the free beach shuttle nowoffered by the Cape Ann Transportation Authority out of Stage Fort Park.

Hale acknowledged that not all of the issues are on the highways. Some complaints come from those wondering why it can take so long to get into the beach parking lots, and he noted that’s not because of the parking attendants.

“A lot of people have questions,” he said. “Sometimes, someone from out of town will come in, see some spots open, and wonder why they can’t have one of those. But that’s because we’re holding those for residents — people who live in Gloucester, bought their stickers, and deserve to be able to go to the beach.”

Citing the practices of this past Sunday — when the city took in $16,800 in revenue from Good Harbor and $8,890 from Stage Fort, with Wingaersheek’s figures still pending as of late Monday— Hale said Public Works normally sells visitors’ passes to between 390 and 400 out-of-town beachgoers for Good Harbor’s 960 parking spots by 10 or 10:30 a.m. before shutting down the lots to resident parking only. The lots were then reopened to visitors around 1:30.

The same percentages go for Wingaersheek, which has 650 parking spaces, Hale said, while Stage Fort can hold about 250.

Romeo Theken said she welcomes the influx of tourists into the city, including for such summer events as the downtownblock parties, which added fuel to the traffic fire this past Saturday, the Bluefin Blowout this Friday and Saturday, and the Gloucester Blues Festival, which is approaching on Saturday, Aug. 8, on the Stage Fort waterfront.

But the mayor said she also recognizes the problem all these visiting drivers create, describing one recent venture in which she was second in line for the Eastern Avenue lights on the Route 128 Extension, yet couldn’t get through the intersection before the next signal change because of the backup.

“It was terrible, and we know it’s been terrible,” she said. “We are working hard to fix it.”

Staff writer Ray Lamont can be reached at 978675-2705, or via email at rlamont@gloucestertimes. com. 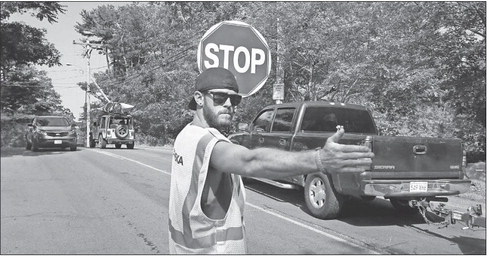 YMCA employee Andrew Dahlmer directs traffic Monday afternoon outside Camp Spindrift on Atlantic Street in Gloucester. The combination of traffic for nearby Wingaersheek Beach and for parents picking up children at the camp creates traffic delays along Atlantic Street.

Click here to see this page in the eEdition: